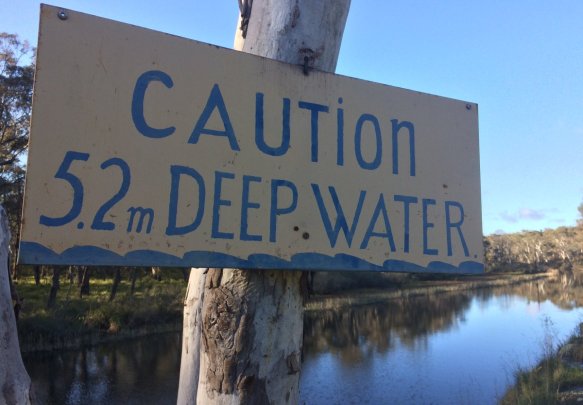 Western NSW, has been substantially impacted by flooding this month and the region has been declared a natural disaster zone. The Lachlan River at Forbes has reached a level not seen for 25 years. There is a lot of water about. 35,000 mega litres of water has also been released from Wyangala dam resulting in further flooding. There could be more to come as “Superstorm 2016” continues to bring rain to south-east Australia. Evacuations continue.

The flooding has come at a time when the weather in warming up and there are already reports of mosquito numbers increasing. The biggest concern is that once the flood water recede, how long will pools of water remain, have mosquitoes got a “jump start”on the season?

On the other side of the world, Hurricane Matthew is threatening Florida. The Bahamas and Haiti have already been hit and more than 2 million people in the US have been told to evacuate their homes. Flooding is expected.

There is no doubt that mosquito populations can increase rapidly following flood. There is even a group of mosquitoes commonly called “floodwater mosquitoes“. The desiccation resistant eggs of these mosquitoes are laying dormant in the cracks and crevices of flood plains, just waiting for the water to arrive. When it floods, the eggs hatch and in about a week or so, swarms of mosquitoes emerge.

For the most part, it isn’t immediately following the flooding, but in the weeks and even months following that can provide the most ideal conditions for mosquitoes. If temperatures aren’t high enough to drive rapid evaporation of ponding (or if additional rainfall keeps them topped up), mosquitoes can start building impressing population abundances. With more mosquitoes, the risk of mosquito-borne disease outbreak can increase. 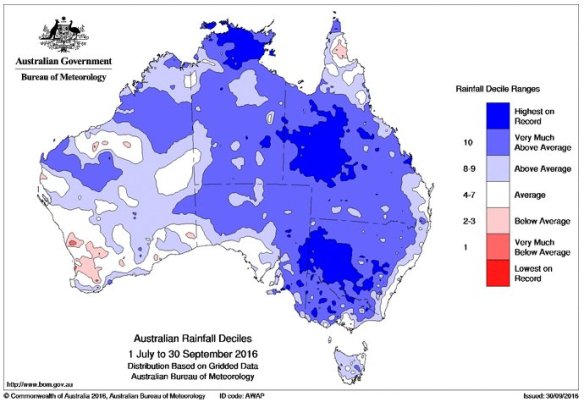 Rainfall records provided by the Bureau of Meteorology indicate that over the three months to September 2016, some regions of NT, QLD, NSW and Victoria received some of their highest rainfall on record for the period. (Bureau of Meterology)

A look back to floods and mosquito surveillance

In 2011-2012, QLD, NSW and Victoria saw incredible flooding. For those of us working in the field of mosquito-borne disease, we’re well aware of what that flooding can cause. Our attention was sparked when stories starting coming out from locals about this being the biggest flooding since the 1970s. Why was this important? Following flooding in the 1970s, we saw one of the biggest outbreaks of the potentially fatal Murray Valley encephalitis virus Australia has seen. This outbreak, and the response to the actual and potential health impacts, was essentially the genesis of many mosquito-borne disease surveillance programs across the country.

One of those programs was the NSW Arbovirus Surveillance and Mosquito Monitoring Program. Following the flooding in early 2012, there was a huge jump in mosquito populations in western NSW and one of the largest collections of mosquitoes in the history of the program was recorded with over 18,000 mosquitoes collected! Fortunately, we didn’t see any substantial activity of Muray Valley encephalitis virus but elsewhere in Australia, cases were reported. 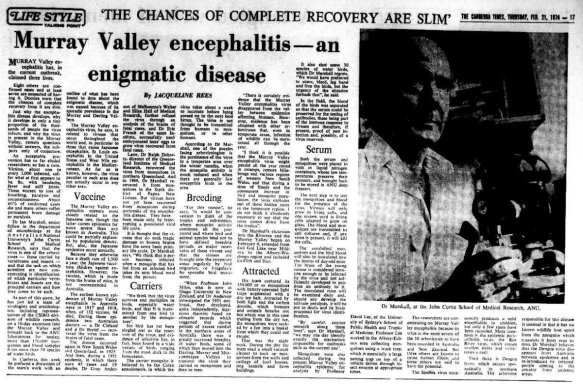 There is little doubt you need mosquitoes about for pathogen transmission. However, for many mosquito-borne diseases, the pathogens that cause the illness in people are naturally found in wildlife. Person to person transmission may occur but for pathogens such as West Nile virus, Ross River virus or Murray Valley encephalitis virus, the mosquitoes that inject their virus-filled saliva into people have bitten birds or mammals previously.

The role of wildlife is important to consider as the flooding may influence mosquito populations but they can also influence wildlife. While kangaroos and wallabies may be adversely impacted by floods, flood waters can provide a major boost for waterbirds.

In some instances, as is the case for Murray Valley encephalitis virus, floods provide ideal conditions for both mosquitoes and birds!

Do floods really cause outbreaks of mosquito-borne disease?

There are few studies that have demonstrated that outbreaks of mosquito-borne disease always occur following floods.

Studies in North America had previously concluded that there wasn’t a direct link between hurricanes and flooding and mosquito-borne disease. But, that doesn’t mean there won’t potentially be a boost in nuisance-biting mosquitoes following flooding.There is often widespread spraying to control these pest mosquito populations.

Interestingly, after Hurricane Katrina hit New Orleans in 2005, there was an increase in mosquito-borne disease with more than a 2-fold increase in West Nile neuroinvasive disease. However, other reports noted no significant increase in cases of either West Nile or St. Louis encephalitis viruses. Surveillance for 6 weeks following the hurricane, authorities found no arboviruses circulating in local mosquito populations. These results highlight that much more than water and mosquitoes are required for outbreaks of disease.

In Australia, a recent review looked at the influence of flooding on cases of Ross River virus disease. They found that the evidence to support a positive association between flooding and RRV outbreaks is largely circumstantial. The trouble in predicting outbreaks of Ross River virus disease is that there can be complex biological, environmental and climatic drivers at work and, irrespective of local flooding, there may be other region-specific issues that either increase or decrease the potential for an outbreak.

What should we expect in Australia as summer approaches?

There is no doubt mosquito repellent will come in handy over the coming months. There are already reports of increased mosquito populations in some parts of the country. While nuisance-biting impacts will be a worry, if mosquito populations further increase following flooding, authorities need to remain mindful of a range of other health risks too.

The good news is that unless higher than normal mosquito populations persist into the warmer months, we may not see major outbreaks of disease. It typically isn’t until November-December that we start to see pathogens circulate more widely among wildlife and mosquitoes. Hopefully, if some hot weather arrives, the flood waters will quickly evaporate and abundant mosquitoes populations won’t continue.

Current outlooks suggest that between now and December 2016, south-eastern regions of Australia are likely to receive above average rainfall. Temperatures, though, are likely to be a little cooler than normal. We’re probably lucky that this cooler weather will keep the really big mosquito population increases that we saw a few years ago at bay.

On balance, we’re expecting plenty of mosquitoes to be about as summer starts, hopefully not “mozziegeddon” but enough to ensure the community should stay aware of the health risks associated with mosquito bites and how best to avoid their bites.

Have you seen mosquitoes about already this season? Join the conversation and tweet some shots of local mosquitoes!