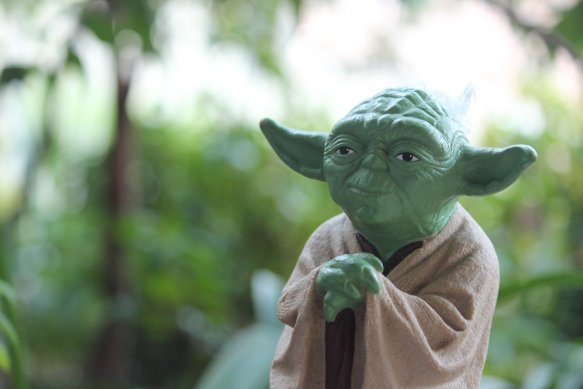 On the eve of the release of Star Wars The Force Awakens, I’ve been revisiting bits and pieces of the previous six Star Wars movies. You know what stands out? I’ve been thinking about the possibility that wielding “The Force” may just be a symptom of parasitic infection!

Growing up with the original trilogy of Star Wars films, my perspective on “The Force” was entirely defined by Obi-Wan Kenobi’s explanation to Luke in A New Hope, “The Force is what gives a Jedi his power. It’s an energy field created by all living things. It surrounds us and penetrates us. It binds the galaxy together.”

I always thought of it as more a spiritual, rather than a scientific, thing. If I thought about it really hard, I could snatch that tv remote into my hand from across the room. Apparently it doesn’t quite work that way. I’d need to be infected with a parasitic pathogen. Midi-chlorians.

So, these intracellular microbes speak to us? Do they control the host? Are Jedi just doing the dirty work of midi-chlorians? I know midi-chlorians have sparked a sea of frustration among some Star Wars fans but lets just assume for a moment that the only reason Force users can do what they do is because they’re infected with special strains of these parasites.

How many times have you imagined you could snatch the remote from coffee table through nothing more than concentrated thought alone?

Can pathogens and parasites control their hosts?

We know that in a galaxy not so far away and not so long ago, parasites have been described that alter the behaviour of their hosts. See here  and here and here. From mind-controlling fungi to parasites that break down your fear of predators there are plenty of examples of how parasites change the behaviour of hosts to their own benefits.

There are insect symbiotes and mostly they’re beneficial. But when it comes to mosquitoes, microbes including viruses, bacteria, fungi and protozoa can influence their role in disease outbreaks.

Viruses, such as dengue, may even influence the behaviour of mosquitoes to increase the chances of their transmission to new hosts. Infection with a virus may also change the way mosquitoes respond to insect repellents. But when some mosquitoes are infected with an intracellular bacteria, a bacteria that’s not naturally found in this mosquito, their ability to transmit dengue viruses is blocked. It can also disrupt their blood feeding and reduce their lifespan.

Now, if mosquitoes are capable of transmitting blood-borne pathogens, could they also transmit midi-chlorians? If a mosquito bites you after its taken a blood meal from Yoda, Obi-Wan Kenobi or Luke Skywalker, could you start using the force? Is the ability to use the force a symptom of vector-borne disease?

Are there Medical Entomologists in the Star Wars universe?

I don’t know how many medical entomologists will be featured in The Force Awakens. According to Wookiepedia there are mosquitoes (or at least mosquito-like insects called Msqitoes) in the Star Wars universe but how would you go about working out if theses or any other blood feeding arthropods could transmit midi-chlorians between Jedi and us normal non-Jedi folk?

When investigating outbreaks of suspected mosquito-borne disease, there is a number of things to consider. Are there clusters of cases that may suggest localised exposure to mosquitoes? If there is widespread disease with little or no link to environments associated with mosquitoes, it is usually enough to suggest the pathway of pathogen transmission doesn’t include mosquitoes. But where there is evidence to suggest mosquitoes are playing a role, where to next?

Collecting and testing field collected specimens can provide some evidence. There are mosquito-borne pathogen surveillance programs in many parts of the world. They rely on collecting and testing adult mosquitoes but can also involve taking blood from wild or domestic birds to determine the circulation of mosquito-borne pathogens in the environment. However, just because a mosquito tests positive to a pathogen, it doesn’t mean it is spreading it to people.

There are thousands of mosquito species worldwide but relatively few effectively transmit mosquito-borne pathogens. For example, in Australia around 40 mosquitoes have been implicated in the transmission of Ross River virus but only one mosquito can transmit dengue viruses. Unless there is a specific relationship between the pathogen and the mosquito, the pathogen wont be transmitted.

Complex path of pathogens from host blood to mozzie spit

Mosquitoes aren’t like dirty syringes. They don’t transfer infected droplets of blood between people. Mosquitoes must become infected with the pathogen before it can then pass it on. Taking a virus as an example, the virus must be ingested by the mosquito together with a blood meal from an animal and then the virus must pass into and out of the cells lining the insect’s gut before spreading throughout the body of the mosquito. Once the salivary glands are infected (a process that takes about a week), the virus is passed on through the spit of the mosquito when it next bites (when feeding on an animal, a mosquito will inject some saliva to get the blood flowing).

For a mosquito researcher, surely Dagobah is top of the list of fantasy field trip destinations! There has to be plenty of mozzies on this swamp covered planet! (Image: Star Wars)

How would you test the ability of mosquitoes to transmit midi-chlorians?

Firstly you need some blood feeding mosquitoes. If there was anywhere in the Star Wars universe where mosquitoes could be found, surely it is Dagobah. The whole planet is essentially covered in wetlands. Once you’ve got the mosquitoes, now all you need is some midi-chlorian-filled blood.

Expose caged mosquitoes to a mix of blood and midi-chlorians (or ask a Jedi to kindly volunteer their arm). For those mosquitoes that feed, they can be put aside and kept alive for as long as possible. Every few days, mosquitoes are removed and tested for infection. Legs and wings can be removed from the mosquito and tested separately from the body. If they’re positive, it indicates the virus has spread through the body of the mosquito.

Known as “vector competence” experiments, studies investigating the ability of different mosquito species to transmit different pathogens help build up a profile of each mosquito and its potential role in the spread of local and exotic mosquito-borne pathogens.

Studies of this nature have been conducted for many, many mosquito species worldwide and many, many different pathogens. Here is a recent example of a study conducted to determine how the transmission of a strain of West Nile virus by mosquitoes influenced an outbreak of mosquito-borne disease in horses.

Things can start to get a little more complicated when you take into account the interaction between the host (e.g. an animal) and the pathogen, the level of viremia that may develop and the propensity of the mosquito to bite people. For example, some mosquito species may be very susceptible to infection and effective at transmitting a pathogen but if those mosquitoes prefer to only feed on birds, the risk to people are generally much lower.

The take home message from all these studies is that the interactions between pathogens, mosquitoes and the animals and people carrying the pathogens are complex. When assessing the risk of mosquito-borne disease outbreak, designing more effective mosquito-borne pathogen surveillance programs or developing strategic public health responses, it is critical to understand the ability of local mosquitoes to transmit pathogens.

In theory, a mosquito taking a blood meal from a Jedi whose blood contains a high concentration of midi-chlorians could potentially pass on some Force-inducing infections to other people. Makes you wonder why Yoda was hanging out in a swamp planet?

Disclaimer: There is little doubt the issue of midi-chlorians has been discussed, dissected and the implications for the ability to wield the force determined within Star Wars Expanded Universe/Legends literature. I know I’ve taken a little artistic license here but if you’re a Star Wars aficionado, please take this article for what it is, a fun way to communicate the science behind mosquito and mosquito-borne disease research.

I’ll leave you with this great CDC video on immunization.

UPDATE! [9 January 2016] So, it seems that not only do mosquitoes potentially help make Jedi in the Star Wars universe but, as the The Force Awakens demonstrates, mosquito-inspired aliens are out and about in the bars and cantinas of the galaxy! Just in the remote chance you haven’t seen the movie, I won’t describe when and where these creatures pop up but they’re known as the “Dengue Sisters” and represent a sentient species of small insectoids known as Culisetto. They look pretty awesome (see photo below from “Star Wars: The Force Awakens Visual Dictionary” by Pablo Hidalgo)

Dengue Sisters from Star Wars: The Force Awakens Visual Dictionary (Thanks Cybergosh for the tip off)!

Perhaps I need to petition Hasbro to create a “Dengue Sister” action figure!