How can coloured plates and sour lollies teach primary school students about science?

For the second year in a row I volunteered in the MyScience program. The program began  in 2006 as “a collaboration between the University of Sydney, the Australian Catholic University, IBM and the NSW Department of Education and Training (Western Sydney Region) to fulfill their common goals of improving primary science education and encouraging students to take an interest in science and technology”.

The program encourages professionals with a science and/or technology background to volunteer in a local school to help teach primary school students about the process of scientific experimentation. It is designed to help the students turn their minds to the process of developing testable questions about how the world works and to try and design experiments to investigate these questions. As does the CSIRO Scientists in Schools and Australian Academy of Science’s Science by Doing programs, MyScience aims to introduce the world of science and technology to school students and encourage them to become the next generation of researchers and innovators. If the calls for scientific research to become a national priority are answered, we’re going to need to ensure that there is a steady flow of “bright young minds” forming the next generation of scientists.

The theme for MyScience this year was food. Unsurprisingly, most the experiments revolved around lollies/candy/sweets. In particular, skittles and warheads. Don’t ask me why but the kids love warheads. If you’re not familiar with them, they’re a hard sweet ball covered in the most sour tasting substance imaginable.

I supervised four pairs of Year 4 students (aged 9-10), each had to come up with a question about food and work out an experiment to test that question.

There were two particular projects that worked out really well.

The first was looking at how plate colour influenced volunteer’s choice of food. There are specific fields of science dedicated to this kind of research. Researchers have looked at how food colour, as well as plate colour and shape, influences the perception of taste. Even the type of cutlery can make a difference! Is colour-related food choice inherited or developed through empirical learning? An experiment like this, as well as providing an opportunity to do some neat experiments, may provide an opportunity to discuss the issue of food packaging and marketing.

The students laid out three colour plates, each with a group of lollies. While I tried to encourage the students to use sliced apple as the “food”, I quickly realised it was a battle I wouldn’t win. The students then recruited their class mates to line up and take turns selecting the plate from which they would like a lolly. The number of times each coloured plate was selected was then recorded. 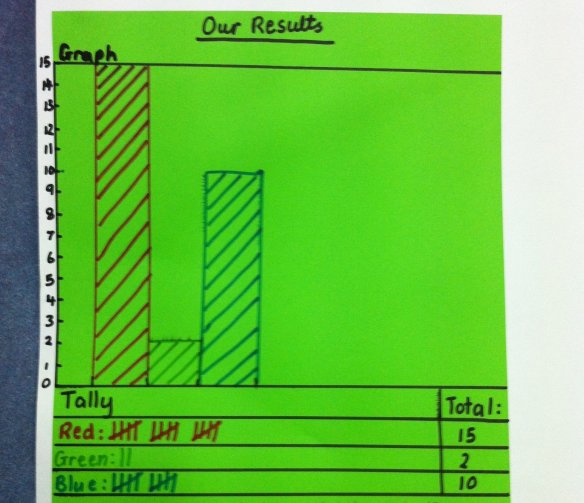 It probably comes as no surprise that most volunteers chose lollies from the red plate. This is actually in line with some published studies. Studies have suggested that foods with green labels are perceived to be healthier but I’m not sure if that means that “unhealthy food” is more likely to be associated with red! It does seem that colour pays an important role in food choice by children.

The best thing about the experiment was that the students really were excited to see that there was a difference in the selection trends of their volunteers. As the sample size grew and the trend become more pronounced, they got even more excited. In the end, it was a nice clear cut experiment that allowed them to make a nice simple chart of results to present to their class.

The second experiment was more of a demonstration that a true experiment. The real focus of these students’ question was to determine if sour lollies were more sour than sour fruit. They asked volunteers to taste one of the sour lollies, and then a piece of lemon, and pick the most sour. The students didn’t place too much emphasis on gathering a decent sample size. They stopped at three volunteers. While they may not have been quite as enthusiastic about the first part of the experiment, I took the chance to work up a demonstration to teach them about food acid and how it relates to taste.

Warheads are dusted in malic acid (dicarboxylic acid). When you suck them, there is an intense sour taste that lasts about 30sec. How could you demonstrate that it is the acid that causes the sour taste and why does it stop?

I made up two solutions of sodium bicarbonate (roughly 1 teaspoon of bicarb mixed into 50ml of lukewarm water). If you drop a freshly opened warhead into the solution, it fizzes up and looks reasonably dramatic. Next, one of the students takes another freshly opened warhead and sucks it until the sour taste is gone. Now drop that “sucked” warhead into the second solution. No bubbles. No fizz.

While this may seem like a fairly basic demonstration, the students were generally excited and during their science fair, it was one of the most popular demonstrations of the morning. This was probably due in part to the joy of watching teachers and parents enduring the sourness of the warheads in front of the students!

Overall, the My Science program has benefits both for the students but also the volunteers. I’ve found that breaking down the process of experimentation and thinking about how to explain concepts to primary school students greatly improves the way I approach communication of “medical entomology” issues to the general public and media. If an eight year old can understand my explainations, I’m hoping everyone else can too.